Although it is called a pie, Boston cream pie is actually a cake. It consists of two round layers of sponge cake with a thick vanilla custard filling. It is usually frosted with a chocolate glaze but it can also be topped with confectionary sugar. The dessert is served in wedges just like a pie. (Source)

I decided that instead of making a pie, I would make cupcakes!

Which leads me too…the week 4 challenge from Willow Bird Baking is…cupcakes! But not just any cupcake. The challenge was for us to make a cupcake, fill it, and frost it. And guess what? Boston Creme Pie cupcakes fit that description. Yup. It’s like killing 2 birds with 1 stone! Sorry, I couldn’t help myself. And I would never kill a bird, because that would make me cry.

Anyways! I made the batter for the Boston Cream Pie, but baked it into cupcakes. Then I made a vanilla pastry cream for the filling. A rich chocolate glaze covers the top. Each cupcake is the perfect portion for a wonderful dessert! See our other cupcake ideas here. 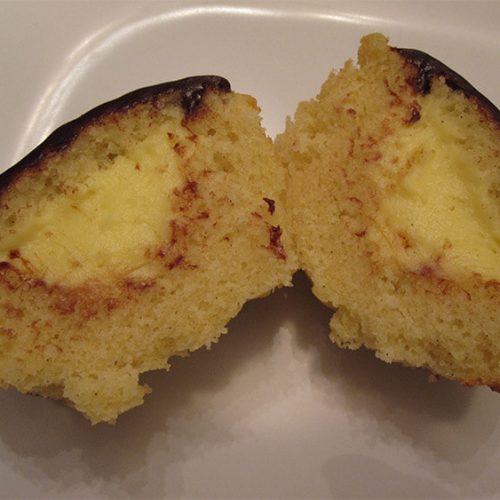 * I greased and floured my muffin pan as directed, however, I struggled to get the cupcakes to come out cleanly. My pan isn’t non-stick, so that might be my problem. * I made the cone-shaped cut as directed and ended up with extra pastry cream. However, when Nick and I were eating the finished cupcakes, we both commented that it could use more filling. I think a more straight-down cut into the cupcakes would have enabled more pastry cream to be used. Please keep in mind that this is our personal preference. Also, I had plenty of glaze on each cupcake, yet had a lot remaining. I think you could make half of the glaze recipe and have enough. The extra glaze won’t go waste (!), but I had more than enough for the 12 cupcakes.