If I asked you to name me 10 flavors of ice cream, would cinnamon be on your list?

Well, it should be!

I’ve made cinnamon ice cream in the past (before blogging), and while it was ok, I wasn’t impressed. I decided to make it again, and added candied pecans to it. Now I am impressed! This is really good ice cream! It has a great flavor, both from the cinnamon in the ice cream and the cinnamon on the candied pecans. And the crunch from the candied pecans is great! Though as a side note, I will say that it was hard leaving enough pecans for the ice cream…I kept eating them! Nick and I really enjoyed this ice cream. I know I will be making it again before summer is over! 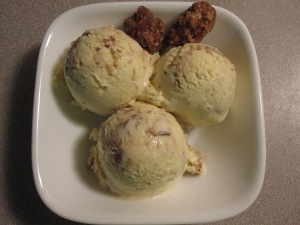 To toast the pecans:

To make the ice cream base: